I’ve lived in East Africa three different times, for a total of a little less than 2 years, and for all that time I’ve been actively, and successfully, avoiding buffalo. Anyone who has visited or lived here knows that the cape buffalo is the most dangerous animal in Africa. Sometimes referred to as “Black Death” or “The Widowmaker”, the cape buffalo is basically a 6 foot tall, 1700 pound, temperamental, unpredictable cow that (surprisingly for its size) can sprint at speeds up to 35 mph if provoked. Over 200 people per year are gored and killed by cape buffalo. So it’s hardly a surprise that I have put considerable effort into avoiding these animals during my time here. But, as they say, you attract what you resist.

This morning, after spending awhile bird-watching from a rock I’ve been calling “lion rock”, due to its frequent nightly visitors, I headed to a tree a few feet away to check my camera trap and then walk back up to Nickson’s house. I looked through some of the photos, secured the camera to the tree, and slowly stood up, only to find myself face to face with a massive cape buffalo standing 10 feet from me.

For about half a second, we both silently froze. Clearly we had surprised each other. Almost immediately, the buffalo broke the silence by aggressively snorting and swinging its head in my direction. This was not good. Heart racing, I reacted with all of the knowledge that’s been engrained in me since my first day here: Don’t run, the buffalo can run faster; Don’t put open ground between you and the buffalo- again, it can run faster; If you can, climb a tree (although buffalos have been known to run up or trample trees in pursuit). 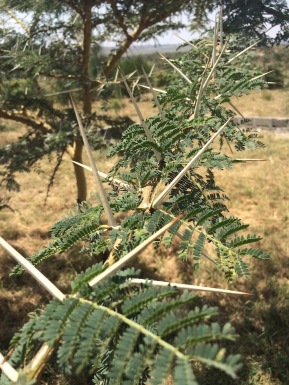 I had to think quickly. There was one tiny shrub and one 2-foot tree between me and the “Black Death”, and hardly a tall tree to be seen nearby. Since the buffalo was blocking my path to the house, I decided to take my chances and go in the opposite direction, toward the national park. There was a serious risk of there being more buffalo in that direction, as buffalo move in herds, but there was nothing else I could do. Of course, all of these thoughts and decisions happened in less than 2 seconds, as this aggressive animal was staring me down. I slowly stepped backward, to half-obscure myself behind a taller shrub, simultaneously keeping my eye on the buffalo, looking for a direction with the thickest shrubs to hide behind, and searching the landscape for the rest of the buffalo herd. Some part of me stupidly secured my belongings to my body (as if they mattered), getting ready to run if I had to. My heart racing, I moved from shrub to shrub as subtly and quickly as I could, noting the potential refuge trees in the area. As I moved it occurred to me that they say, “climb a tree to escape”, but fail to mention the 3 inch long, razor sharp thorns covering every tree in the area.

Sliding from bush to bush, I made a wide arc toward the national park, and then cut through a large zebra herd going back toward the house through an open field. All of this took less than 5 minutes. My heart pounding out of my throat, I looked back in the direction I came from, part of me wondering whether I had imagined the entire thing. But no, deep in the bush, a glimpse of a black tail swinging, and the sharp tip of a dark grey horn.

2 thoughts on “A Buffalo Surprise”